What Are the Acoustic Wonders of the World?

When looking for new places to visit, we often jump straight to visually, intellectually, or historically interesting destinations. I want to highlight some of my favourite sonic destinations that can inspire you to explore the amazing world of acoustics. This list will feature 5 places that will add another dimension to your travel experience - sound.

6. Explore the Sonic Wonders of the World

— The acoustic theatre with amazing sound to the last row

For millennia, scientists tried to figure out how building acoustics behave. Around 350 BC, there was a Greek sculptor and architect, Polykleitos the Younger, who had the assignment of designing a 6.000 seat amphitheatre in Epidaurus, Greece. It was built in two phases — one during the 4th century BC and then in the mid-2nd century AD. 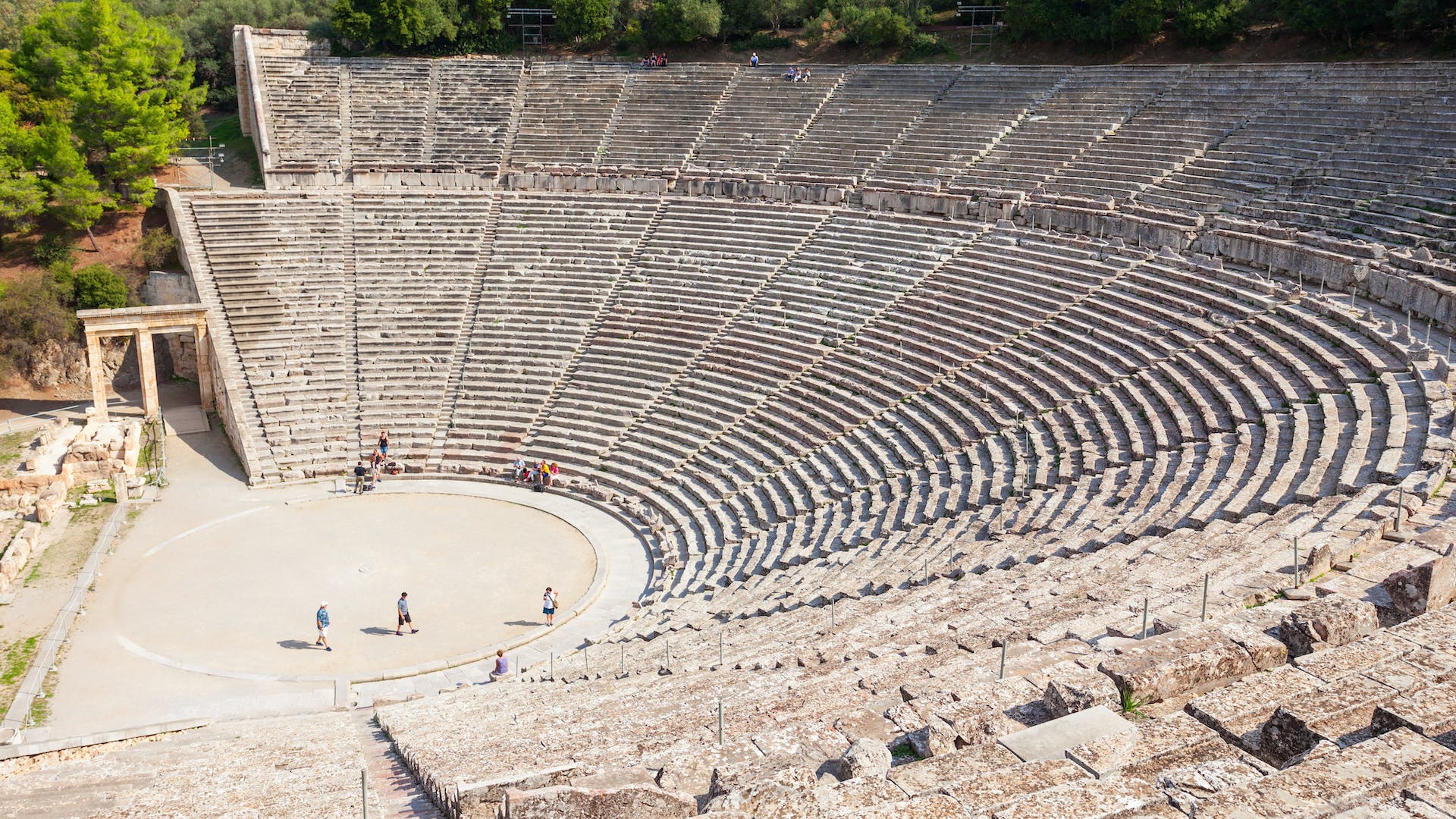 Back in 2007, two Belgian researchers from the Georgia Institute of Technology were able to reveal a part of the acoustic mystery. It was shown that there is a link to the corrugated shape and the rocky material of the seats serve as a filter for the sound coming from the orchestra [1]. The result is a measured average reverberation time of around 1,00 seconds [2].

Can You Hear a Pin Drop?

The theatre was built with specific shapes and dimensions that are governed by the mathematical principles — influenced by Pythagorean philosophy. Because of its special acoustics, they say you can even hear a coin drop from the back rows of the Epidaurus Theatre.

In 2017, researchers from the University of Technology in Eindhoven mapped the acoustic qualities of the Epidaurus theatre to find out [3]. They say that the sound quality of the theatre is good, but not as impressive as many travel guides claim. Maybe you can experience it yourself to find out if that is true.

The Epidaurus Theatre has inspired architects for thousands of years and remains one of the best-conserved theatres of its kind in the world.

Close to the world-famous Tower of Pisa is another eye-catching religious landmark, namely, the Baptistery of Saint John (Battistero di San Giovanni). The structure of this building is quite extraordinary. The construction took more than 200 years for the bottom half was built according to Romanesque architecture, while the upper half is Gothic. In total, four architects were involved.

The first was Diotisalvi, who began the construction of the baptistry in the Romanesque style in 1153. Father and son, Nicola and Giovanni Pisano gave the upper part a Gothic transformation between 1277 and 1297 and architect Cellino di Nese added the Gothic dome in the 1300s. It was finally completed in 1363. 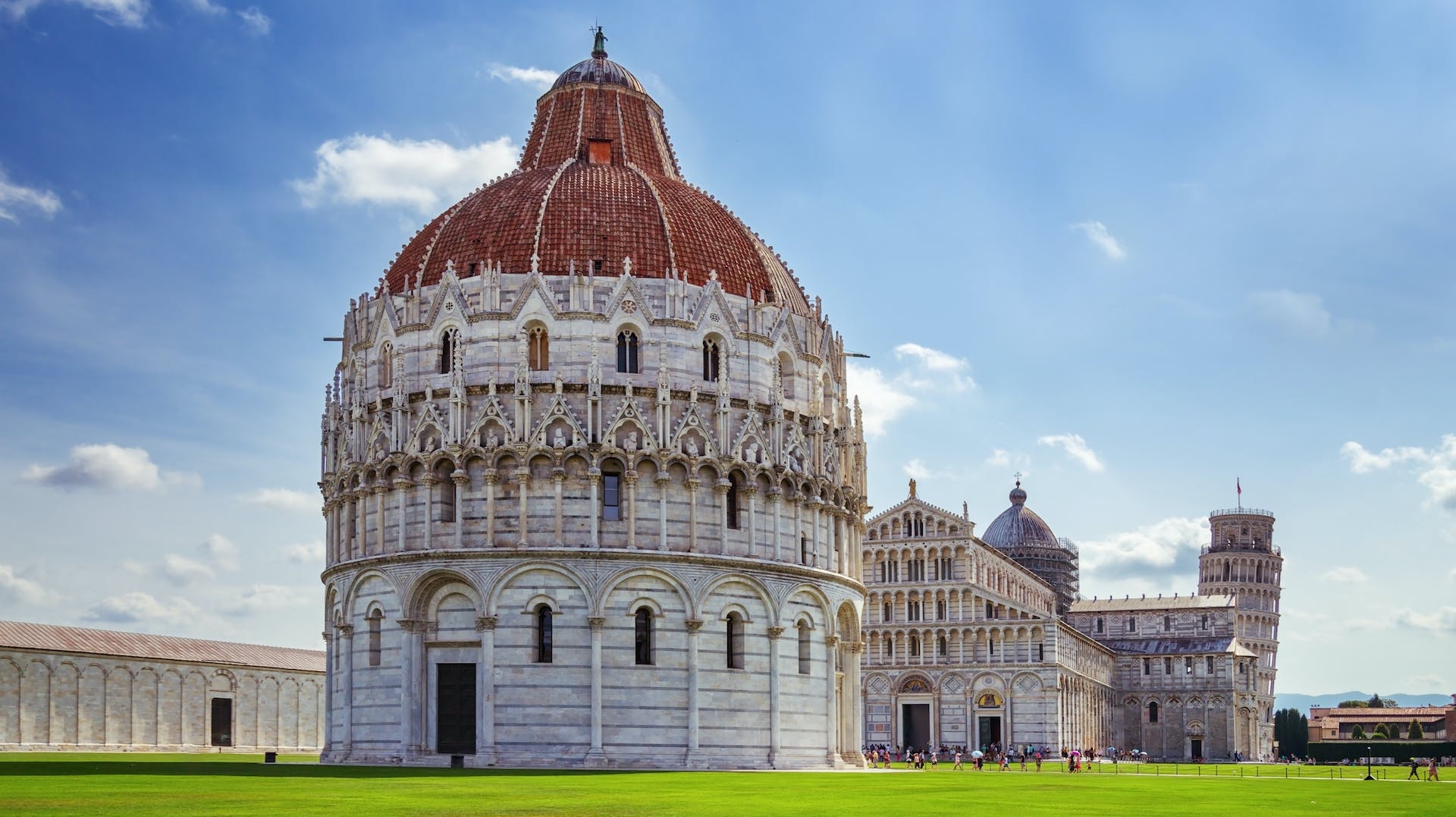 The interior is fairly plain and not especially attractive, but it includes three great treasures: the first is the baptistery's pulpit. It’s a masterpiece carved in 1255-60 by Nicola Pisano.

The second is the central baptismal font that was carved and inlaid by the Gothic sculptor Guido Bigarelli da Como in 1246. In the centre of the font is a 20th-century statue of St. John the Baptist, to whom the baptistery is dedicated. And last but not least, it’s the extraordinary acoustics.

Measurements carried out in 2019 indicate that the average reverberation time is extremely high, the sound echoes around 13 seconds [4]! This performance is enabled by the fact that the interior of the Baptistery is mostly made of marble, a material that reflects the sound waves instead of absorbing them.

Acoustics Makes You Sing in a Sonic Treasure

If you climb to the Upper Gallery, you can try out the exceptional acoustics yourself. Some say that the amazing effect of singing by oneself and sounding like a choir is possible. If your voice is not like Pavarotti, don’t worry. The incredible acoustics is also demonstrated every 30 minutes by a person on duty, who sings a few musical notes in this hidden sonic treasure. 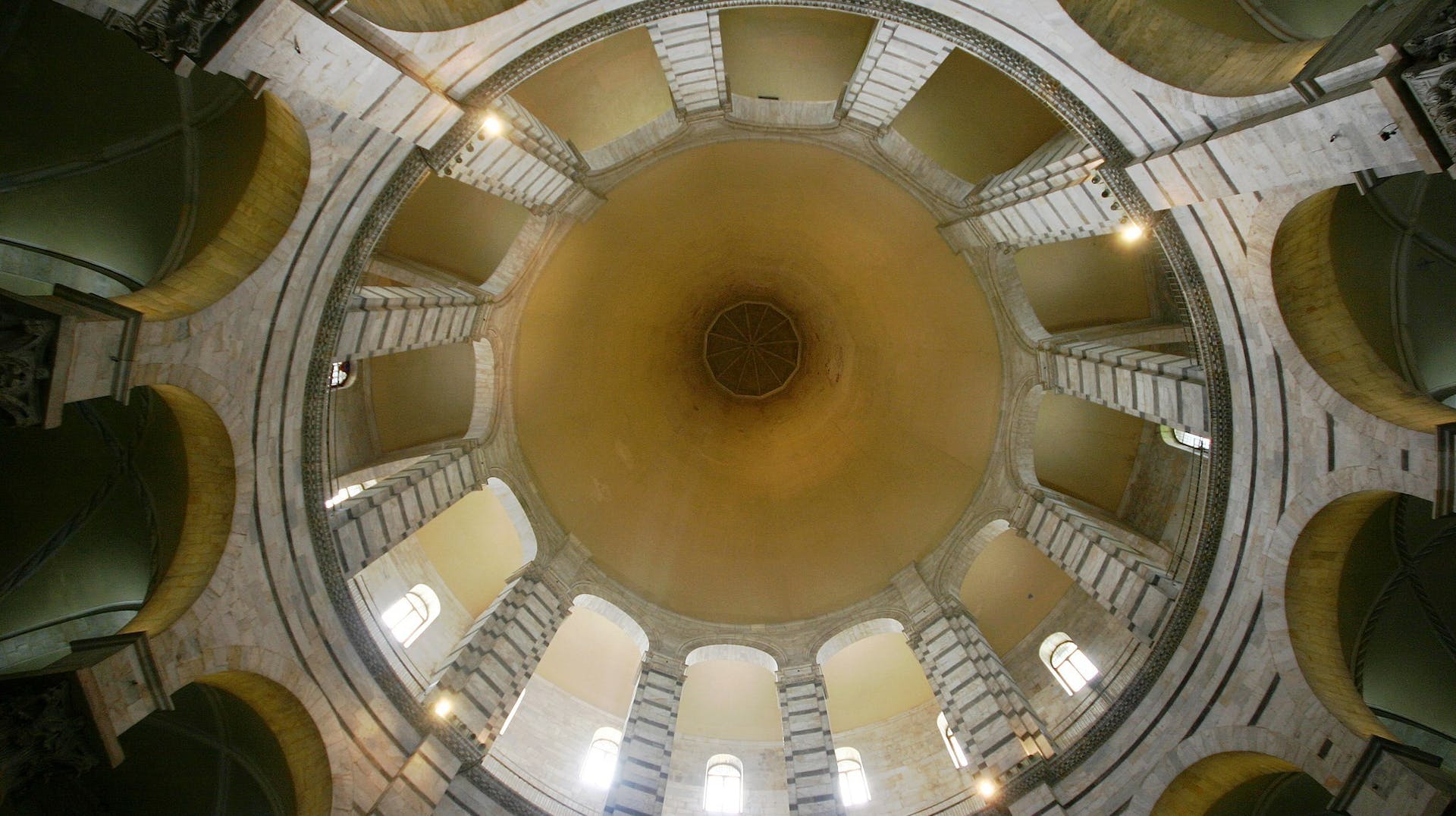 — The Complete Silence in the World’s Tallest Dome Church

The history of the St. Peter's Basilica begins in the 4th century when the emperor Constantine the Great decided to build a church on top of Saint Peter’s tomb. In year 329 the construction of the church was completed. Almost 1200 years later it was Pope Julius II, who decided it was time for a new church, the Basilica as it shows today.

The construction of St. Peter’s Basilica took more than a century. Donato Bramante was the original architect who started in 1506, unfortunately he passed away in 1514. Several architects have succeeded him over time, like Raphael and Carlo Maderno. The last one was Bernini in 1629, who was in charge of the interior decoration of the whole church, giving it its present appearance. 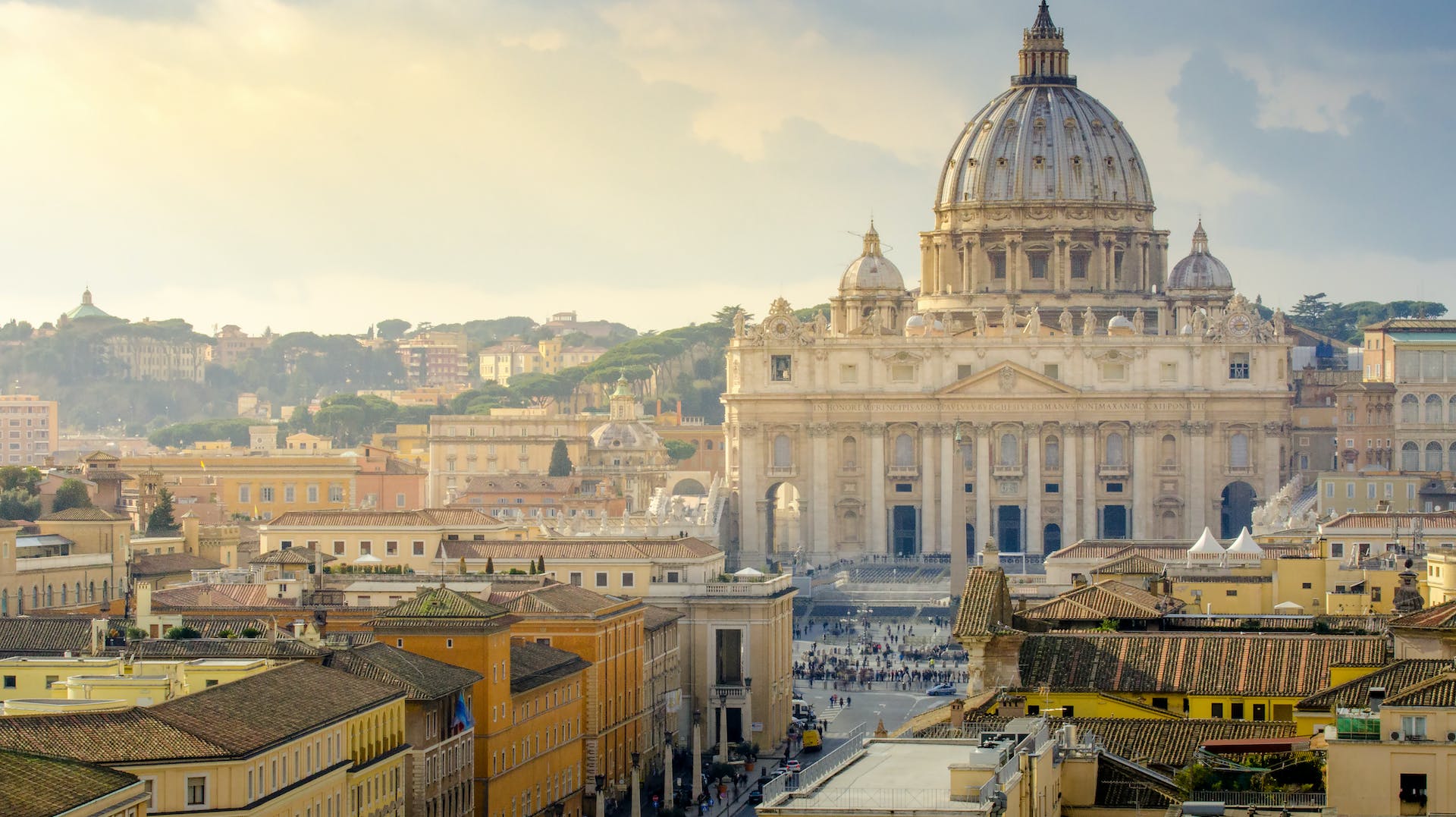 The final dome and the architecture are accredited to the brilliance of Michelangelo. Most likely, without him knowing, he had created a special acoustic phenomenon — a whispering gallery.

Psst, Can You Hear Me?

Whisper along the curving wall of the dome, and anyone positions anywhere along that same wall will be able to hear you. Even if they're on the opposite side of the circular path — 33m distant and much beyond the range of a normal whisper.

Talking along the wall — rather than at the wall — can produce a much stronger effect. The more marginal the angle is and the clearer and better the whisper gets. Just be aware that there shouldn’t be too much background noise. I can’t imagine how many words that curving wall has heard over the past three and a half centuries.

So, if you want to try it out, try to be a bit more creative than using the words: “Can you hear me?”.

You can enter St. Peter’s Basilica for free but it’s wise to book a tour to avoid a huge line. It’s important to note that a standard tour does not include access to the whispering gallery; you will have to purchase tickets that specifically offer a tour of the dome. 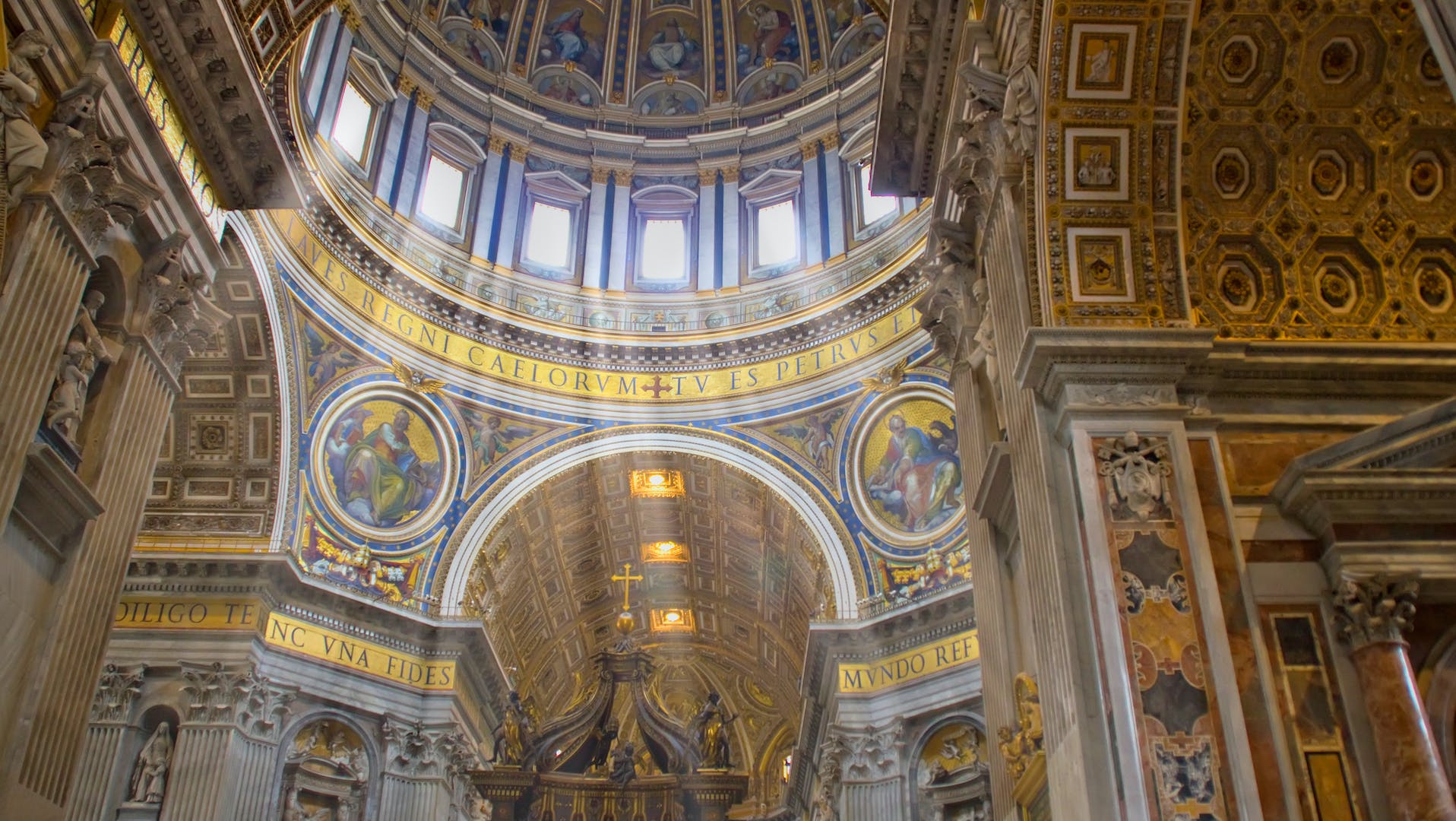 — A Perfect Symphony of Design and Acoustics 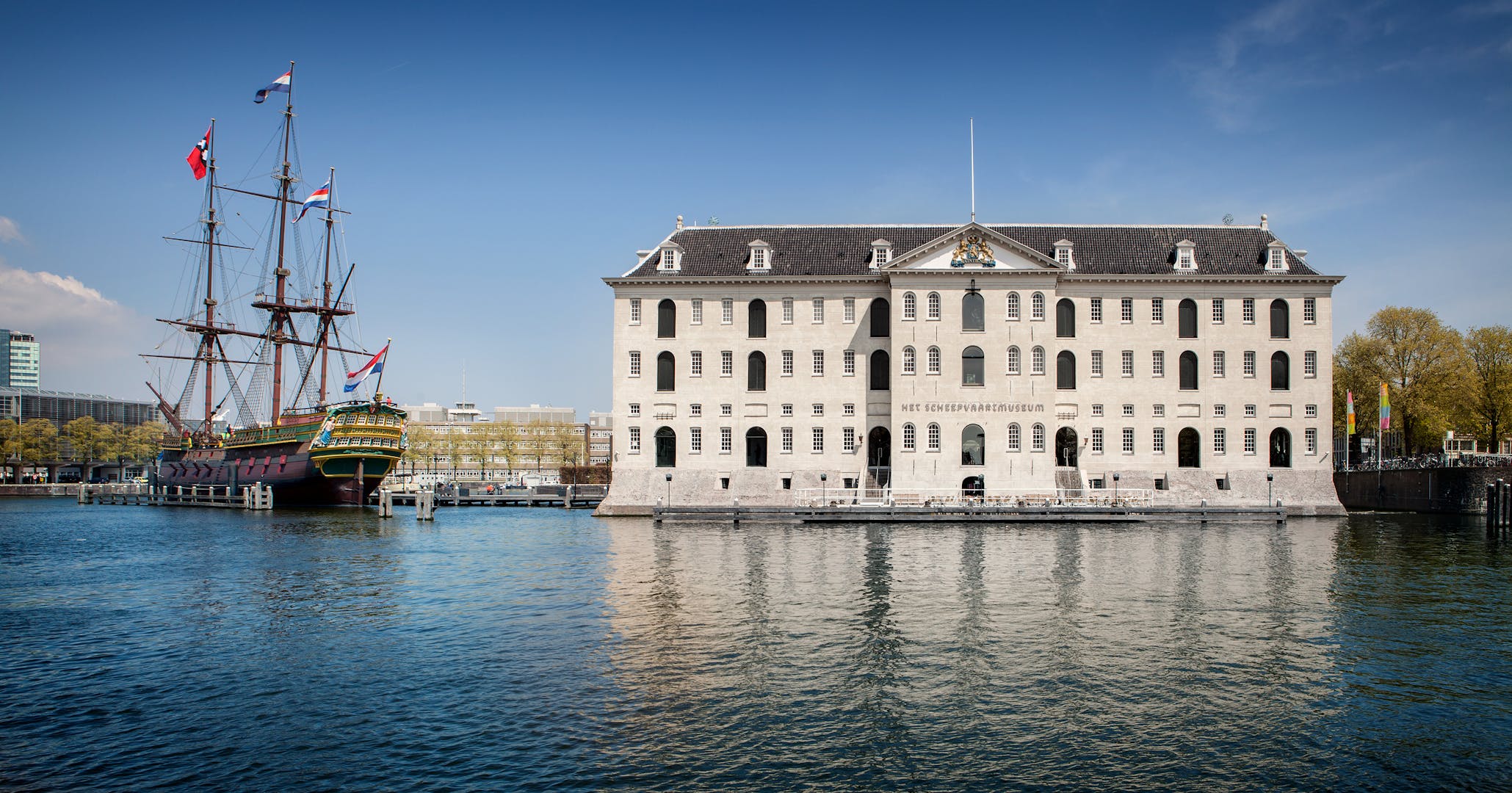 The Dutch Golden Age in the 17th century saw Amsterdam emerge as one of the most important trading centres in the world. Because of the explosive growth, the town council had three new islands built for shipyards. One of them — the shipyard for the Admiralty of Amsterdam — also contained a huge storehouse that held sails, flags, cannons, drinking water, and sailing equipment stored for the war fleet. It was designed by the first city architect in Amsterdam, Daniël Stalpaert. The building opened in 1656 and was called the Arsenal.

In 1791, the biggest part of the building was destroyed by a fire, leaving only the outer walls behind. When Napoleon entered the country in 1795, he founded the Batavian Republic and assigned the renovated building to the national navy. The Arsenal became and remained a storehouse for 175 years.

In 1973, the building’s function changed. It became the home of the National Maritime Museum — Scheepvaartmuseum. The museum showcases 500 years of maritime history. It has one of the world’s biggest maritime collections that include paintings, ship models, weapons, world maps, and other objects — with which the history of Dutch shipping can be told. 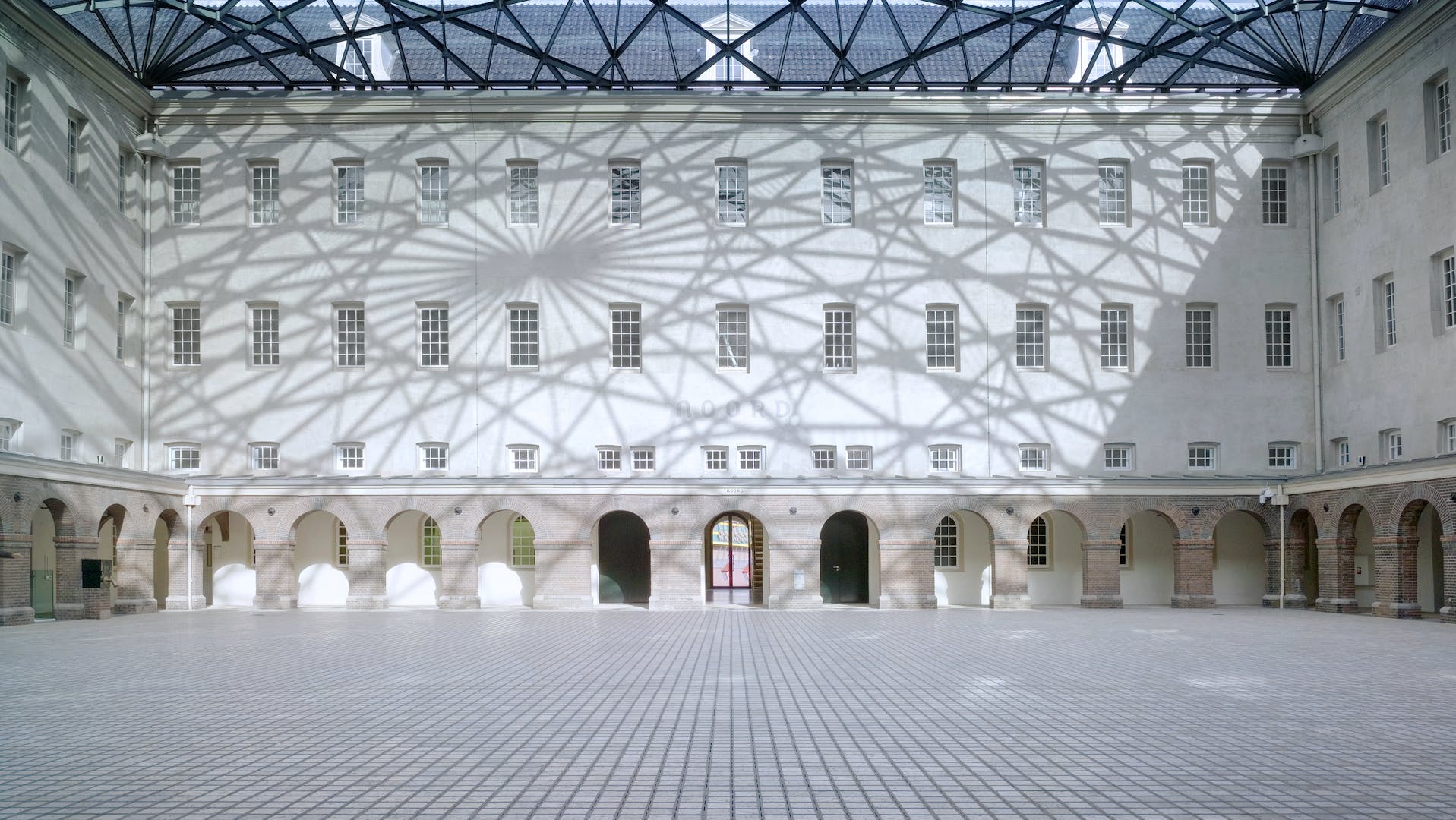 In 2007, after many years of intensive use, the building was in dire need of a thorough renovation. Liesbeth van der Pol — founder of Dok architects — took on the design. She aimed for the museum to serve a larger number of visitors while maintaining as much of the historical structure as possible. One of the highlights of the renovation was the covering of the complete inner courtyard. This huge self-supporting glass dome 34 x 34m (112 x 122ft) — designed by Belgium architect Laurent Ney — was inspired by the compass lines of old nautical charts.

A real masterpiece of acoustic engineering

But instead of looking up, you should a look down. Under your feet, you can see a floor that is unique of its kind — a floor that absorbs sound! To ensure that the covered courtyard can be used as a multifunctional public space, it was necessary to enhance the room acoustics by adding sufficient sound-absorbing materials.

Since it can’t on the walls or underneath the glass dome, the only solution was the floor. With the use of the specially developed sound-absorbing floor, the reverberation time was reduced from 13 seconds to the desired 3 seconds — an astonishing result! Or as a pirate would say “Shiver Me Timbers!”.

— Acoustic Architecture for the Literary Readers

The most recent travel destination is a spectacular library in the Finnish capital: Helsinki. It's designed by ALA Architects Ltd. and has opened its doors since December 2018. It sits opposite the Finnish Parliament and around the corner from the Kiasma Museum of Contemporary Art.

They named the building “Oodi”, and for a good reason. Finnish is a wonderfully, poetic language. “To be, or not to be”, for example, sounds like “Ollakko vai eikö olla”.

The word Oodi means Ode in Finnish and is a sonnet to words — especially the ones that are written in books. But Helsinki’s new public library goes far beyond books.

Oodi is a meeting place for creativity, learning, and relaxation. It extends over three floors with three different concepts, where there is room for both quiet and more noisy activities. It offers a cafe, a restaurant, a cinema, a sound and film studio as well as a large public terrace. It is a library of a new era, a living, and functional meeting place open for all. 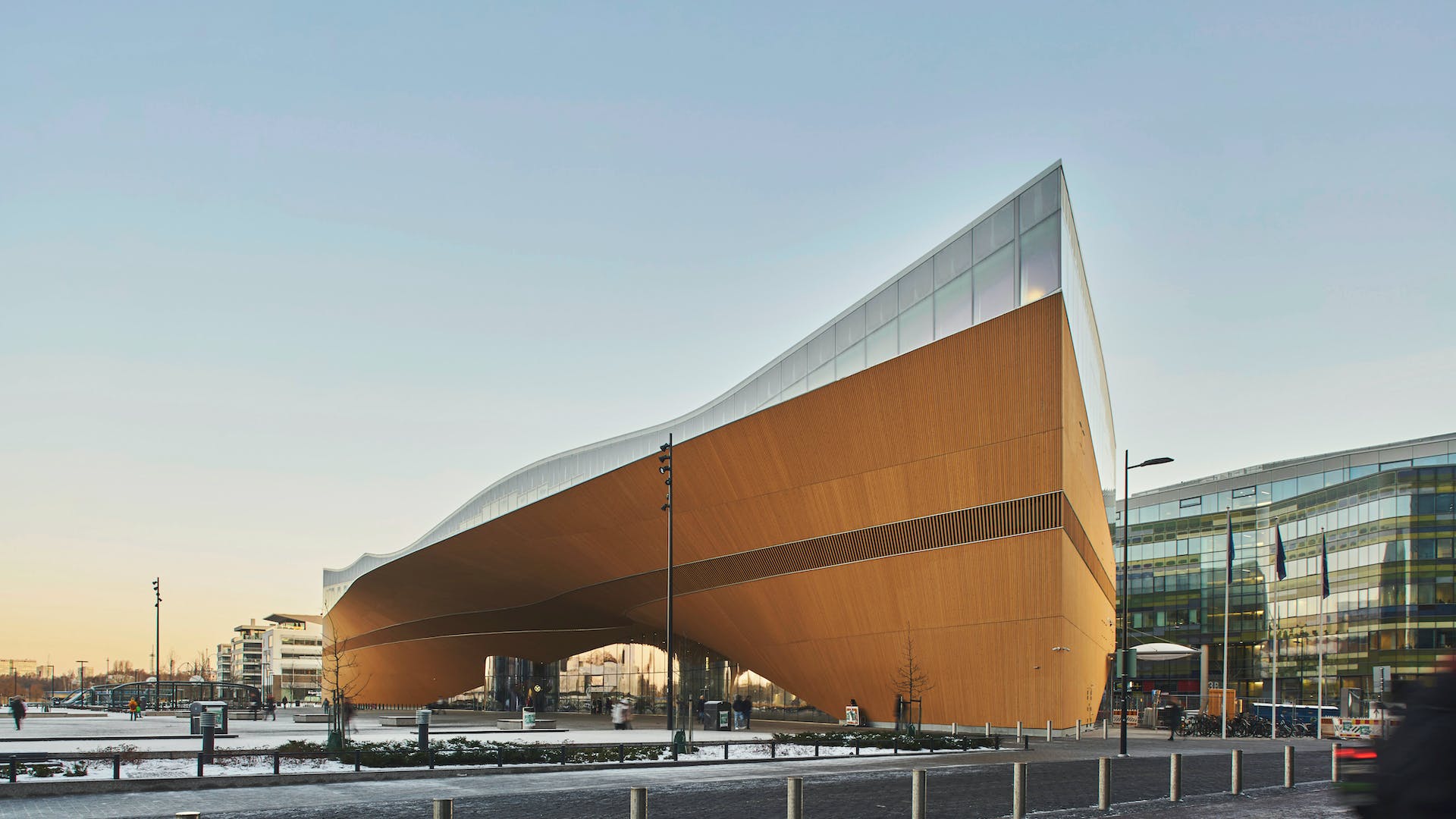 Oodi also stands out when it comes to sound and acoustics. Acoustic comfort is necessary for a library to succeed [7]. Most of us are accustomed to the fact that libraries require silence to function, but in this case, the common standards have been elevating, thanks to carefully selected and well thought out materials and solutions from Rockfon.

On the top floor is a vast open landscape topped with an undulating cloud-like white sound-absorbing ceiling punctured by circular roof lights. The serene atmosphere on this floor invites visitors to read, learn, think. No wonder people started calling this great sounding venue — “a book heaven”. 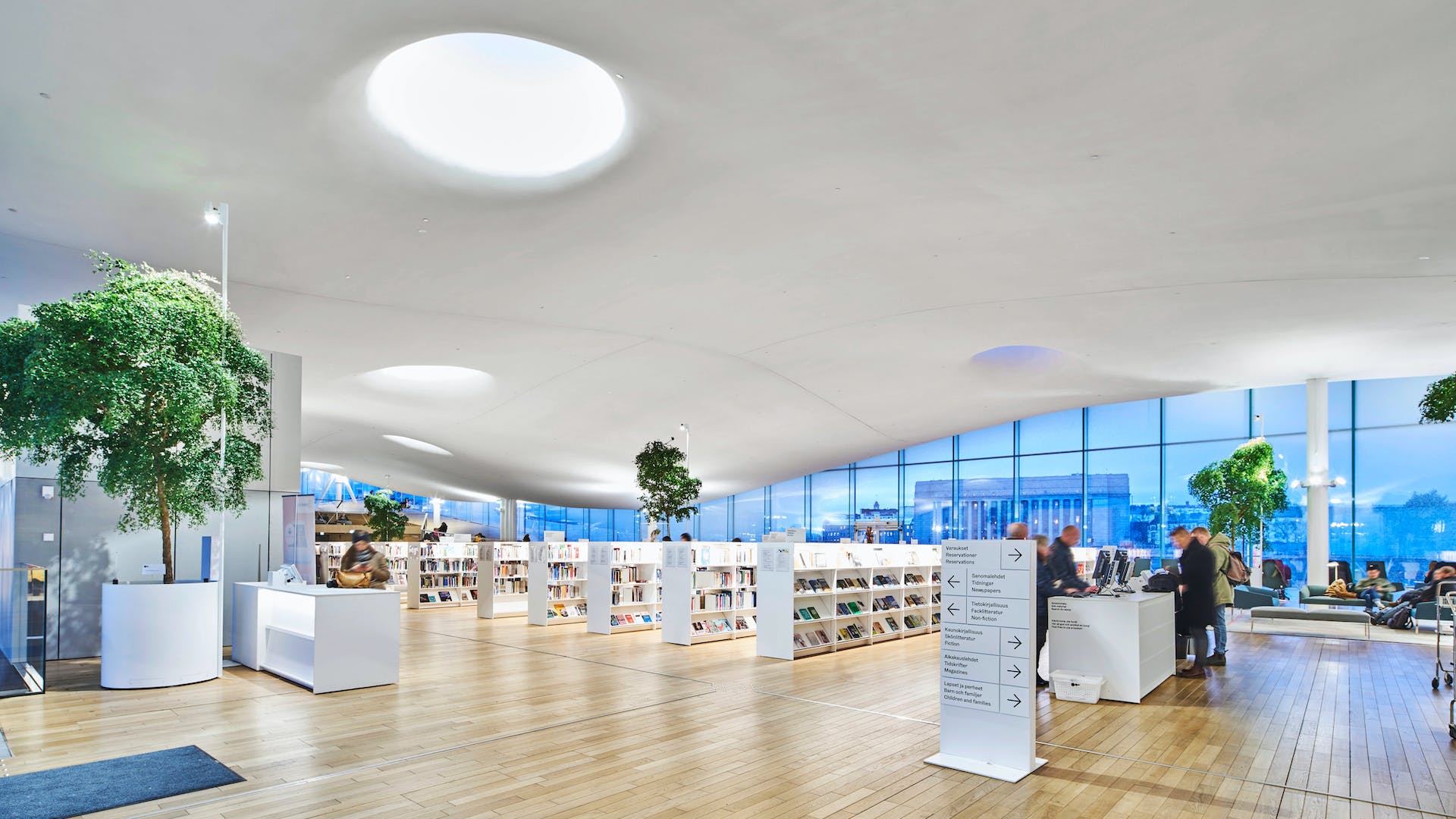 Explore the Sonic Wonders of the World

Hmm, you might be surprised that there is no concert hall or symphony hall among these travel destinations to experience great acoustics. But we are just starting this acoustics journey and maybe next time I’ll share my must-stop destinations for the classical music lover among you.

I hope you got inspired to visit some of the most iconic destinations around the world and experience how they sound like. In the graph below, you can see how science looks at it. 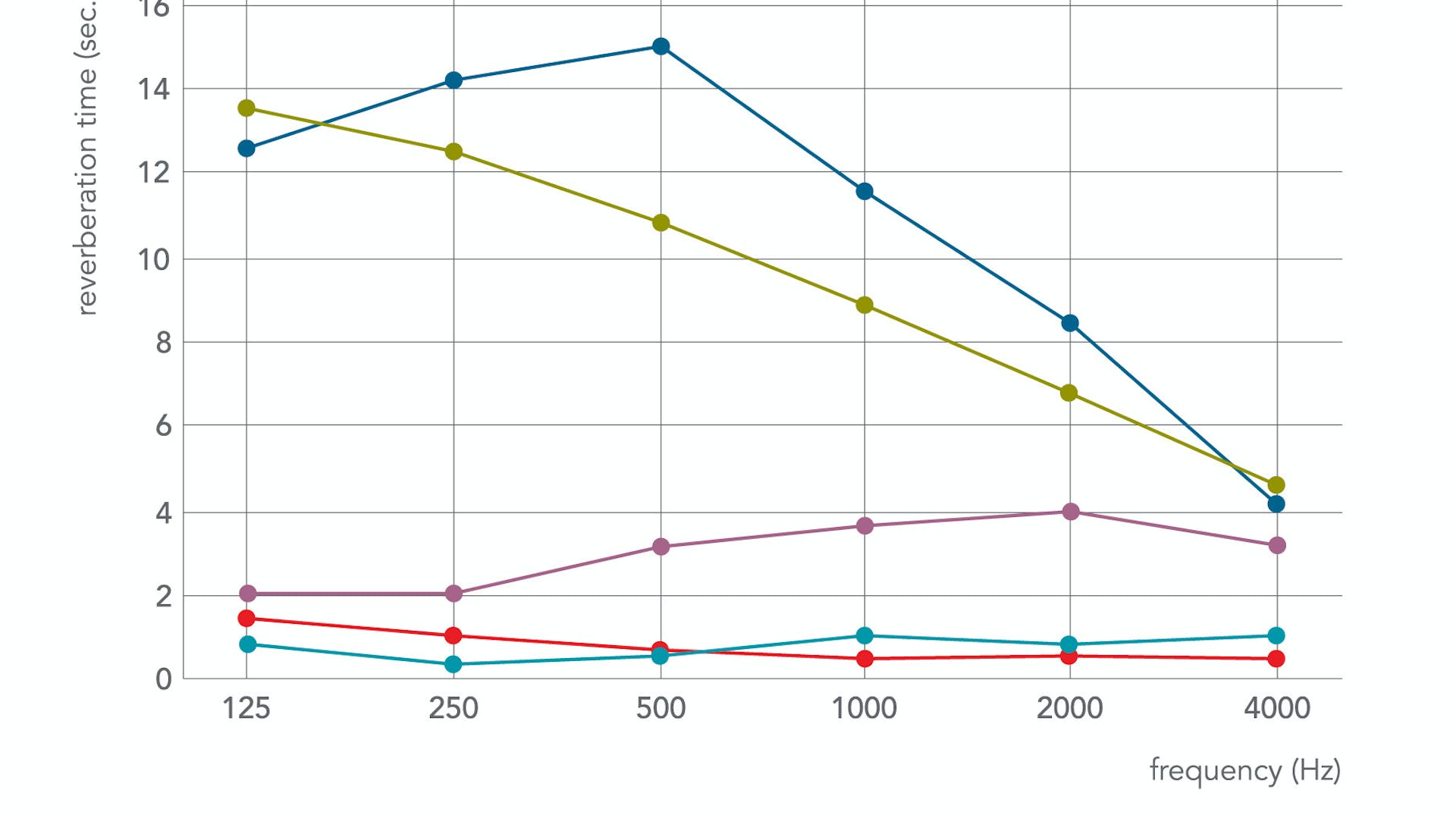 I would like to express my great appreciation to ir. Jeroen Vugts, senior advisor and co-owner of acoustical consultancy LBP|SIGHT in the Netherlands, for sharing the room acoustics data about the new National Maritime Museums’ courtyard and Petteri Laine, acoustician and project manager at Helimaki Acoustics in Finland, for sharing the acoustics data about Helsinki Central Library.